A native fish to the Amazon basin and the Rio Negro region of South America, the Monocirrhus was discovered by Heckel about 1840 and introduced to the U.S. in about 1933.

There are other fish called leaf fish such as Polycentrus Schomburgkii and the Pristolepis species. however none of these possesses the shape or coloration to resemble a leaf like the Monocirrhus. Monocirrhus Polyacanthus means "many hard spines with a single hair" which shows that the early Ichthyologists, as a whole, were not impressed with what the fish looked like.  The leaf fish has a barbel (goatee), thus the "single hair" theory.  Most of these barbels get broken off during capture and shipping.

Enough with the boring stuff.  I purchased three leaf fish about one year ago, all about 1 1/2" in size.  I lost one and continued to raise the other two in a 10 gallon stocked with a couple of Corys.  As they grew and tolerated each other, I figured we may have a pair.  This is difficult to determine as there is no sexual dimorphism.  The only way is as the female is full with roe she will appear thicker in the stomach region.  One of the fish grew much larger than the other (3 1/2" to 2").  I assumed the larger would be the male.

As it turned out, the larger fish was the female.  I didn't notice the swelling in the stomach or any other signs to confirm that I even had a pair until later.

Even without knowing which sex each was, I discovered these fish were aptly named as they certainly do resemble a leaf.  With rays like an elm leaf, they hold still in the tank and even lie sideways at times when larger feeders are placed in with them.

When the Monocirrhus eats, it swallows the fish whole by extending its mouth like a large tube (approx. I" on the 3 1/2" fish), thus the feeder is sucked in, always head-first.  They strike out at the fish so rapidly, you cannot really see what happened, except the fish is gone.  They can take a fish almost the same length as themselves.  If you are patient and sit and watch, you can see them eat and yawn.  When they yawn you can really appreciate the size and length of the mouth extension.  When they are stalking their food (larger feeders especially) the forehead of the fish swimming head-down will almost glow.  They are able to turn this line on and off at will.

This stripe is referred to as an interorbital stripe (the lacustris Rainbow has a similar stripe at mating time).  The line, the fin rays, the mottled coloration, the stillness and waiting all combine to make for the ultimate camouflage (Fig. I).

My two remaining leaf fish were held in a tank at a pH of 6.6 to 7.2 and the temperature at 78 degrees.  The water was softened only by our water softener (I don't feel the possible added salt does any harm).  The tank was planted with a large leafed plant, Echinodorus, I think. Filtration was an under gravel plate with dual lift tubes.  The lighting hood had two 15-watt incandescent bulbs. 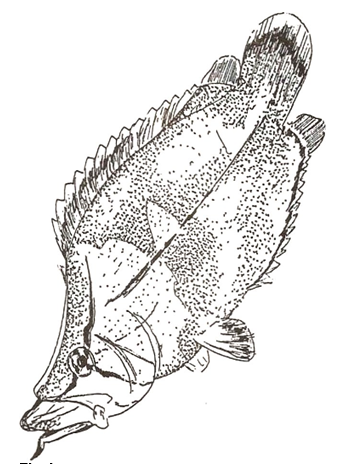 After the fish attained a size I believed was spawnable, I waited.  Leaf fish are always hungry and each fish would readily accept two or three guppies per day.  I waited some more.  Three months plus went by -- nothing.  It was getting time to clean the tank and I was getting impatient.

At the same time the tank I kept the feeder fish in was in use with cichlid fry and not knowing what to do with the two dozen "Rosies" (a minnow-type feeder) I had bought for them, I put them all in the tank. The feeders were gone in two days.

Three days after the water change and mass feeding, I noticed that the smaller fish (which was the male) had turned a golden tan In color, a contrast from his usual mottled brown appearance. The larger fish (the female) had lost her golden hue and was very dark in color with little mottling.

The male was standing guard over a spawn of a hundred plus eggs which were laid on the underside or a leaf. The female was over in the other corner or the tank.

Knowing that the male guards the eggs was the only sure way I could sex the pair.  I pulled the female out and placed her in a separate tank so she could be fed. I left the male with the eggs for four days until the wigglers were close to free-swimming.  I did not feed him during his time with the eggs because I was afraid he might eat the eggs to defend them from prey.

The fry on becoming free-swimming look like a comma from a typewriter, the head and mouth being the largest part of the fry.  They could immediately eat baby brine shrimp.  I turned down the air on the filter system as it seemed that they were being pulled down into the gravel.

Well, it's been almost 60 days and I have raised 40 half inch leaf fish. At this point they also need live food besides baby brine and so comes another challenge of which fry to feed -- angel fry, Betta fry, Aplsto fry?  Guppy fry are still too large for them but the leafs should be large enough in about two weeks to tackle them.  I have slowly raised the pH on the fry tank up to 6.6 and lowered the temp to 80 degrees and' 'they all seem to be doing fine.  I could write another two pages on these fish as to how they move without showing any fin movement, but I think I can save that for a second article some day.

So, if you want something "a lot" different than the fish you are now keeping, try some leaf fish.  But remember, they only eat live food.

Special thanks to J. Methvin for the Aequiden fry at a crucial time.