“Native fish?  Why would you want to keep native fish?”  That’s what I asked my husband, Dave, when he suggested we stock our “new” 40 gallon aquarium with fish from a gravel pit near our home in Des Moines Iowa.  His answer was that, as a fisherman and nature lover, he liked the idea if observing our local fish close-up.

Despite my reservations, I accompanied him on a few collection trips and within a few months the unexpected occurred.  I realized I was enjoying Dave’s wild fish more than my tropicals.

Three years later we moved to the Twin Cities, leaving our Iowa natives behind.  For the next two years I was too involved with other projects to invest the time necessary for wild fish.

Then the bug bit again, and before long I had stocked the 20 gallon aquarium with sunfish and bullheads.  I was back to fretting over water changes and experimenting with food and getting ready to set up our 40 gallon tank again.

Why do I do it?  I’m not sure, except that observing their behavior, and watching them adapt to aquarium life fascinates me.  I enjoy the little surprises, such as noticing that a largemouth bass can be more timid than a bluegill.

I'm writing this article for anyone who hasn’t kept natives and thinks that he/she might like to.  It’s pretty basic, it’s because there’s so much to learn and because I feel I’ve just scratched the surface.

Once I would have said that you have to collect native fish from the wild.  However, just recently I’ve seen them in the aquarium shops.  The owners I’ve talked to obtained their fish from hatcheries.  One advantage of buying hatchery fish is that they are free from parasites that often infect wild fish.   Also, hatcheries are the only legal source for juveniles of certain game species.  The disadvantages are that you are limited to the species bread at the hatchery and you miss the fun of collecting the fish yourself. 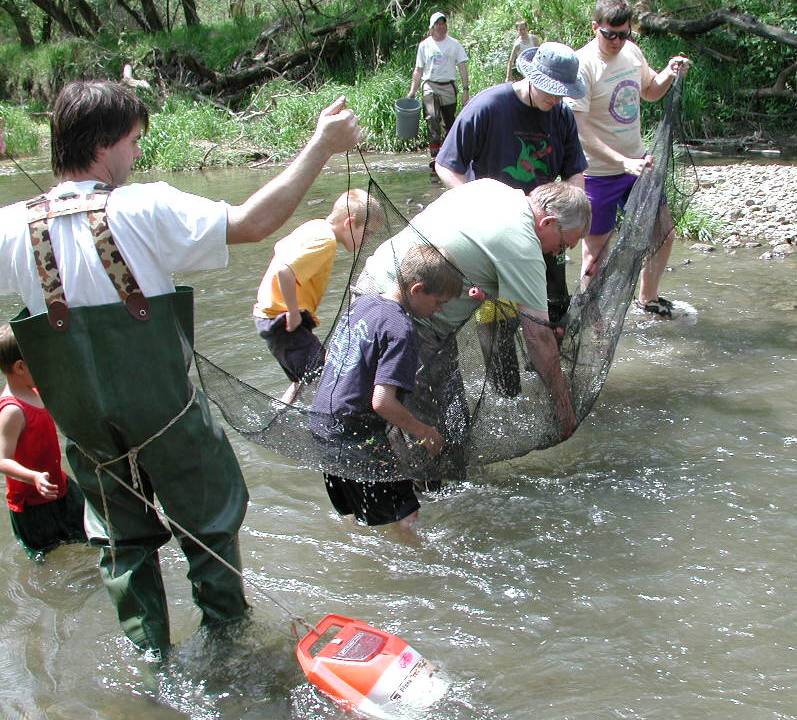 I prefer to collect my own fish.  In fact, I consider collecting to be one of the major attractions of native fishkeeping, especially for those of us who can’t afford a trip to South America of Africa.

If you decide to collect your own fish, first obtain a comprehensive guide to North American fish, or to fish in your area.  Not only will it help you choose and locate the species you want, it will also help you create a suitable habitat.  Needless to say, creating the proper habitat is a critical part of collecting.

Secondly, study the current state fishing regulation.   To collect game fish in Minnesota, you need a rod and reel and a fishing license.  Juveniles of some species may not be taken at all, or may be taken only from certain bodies of water or at certain times of year.  Note: it's illegal to keep more than your legal possession limit of any one species.

Besides your rod and reel, (or seine net for minnows), you will need something to transport your specimens.  Dave and I use a 5 gallon bucket for short trips.  A battery operated air pump, of the type used in minnow buckets, is a good idea if you’re collecting a long way from home.

Try to catch the youngest specimens possible, because they usually adapt more easily to aquarium life.  This past summer, Dave and I collected eight I¼” to 1½” sunfish and three 2” largemouth bass.  We used rod and reel, #14 barbless hooks, and tiny bits of worm as bait.  We fished in shady, weedy areas near the shoreline of a small lake.

Once they’re home, it’s a good idea to quarantine them, especially if you’re taking them from a body of water you’re not sure about.  And, of course, try to make their transition from their water conditions to yours as smooth as possible.

Employing the basic techniques of aquarium management will keep most natives healthy.  Your fishing guide and a study of the surroundings where you collected your specimens will help you create a comfortable environment.   Also, keep in mind how large some of these fish become.  My juvenile sunfish get along quite well in a 20 gallon tank - for now.  By next spring they will have long outgrown that home.  In a few years they could reach nine to eleven inches or more.

Some cold water species may have trouble with a too-warm aquarium in the summer.  However, the sunfish we’ve kept (bluegill, green sunfish, pumpkinseed, warmouth and largemouth bass) and the catfish (bullhead and channel cats) seem comfortable at room temperature, winter and summer.

They also can adapt to a verity of water conditions, making them relatively easy to maintain.  For filtration, we use a combination of under gravel and power filter.  We add one teaspoon of salt per gallon of water. 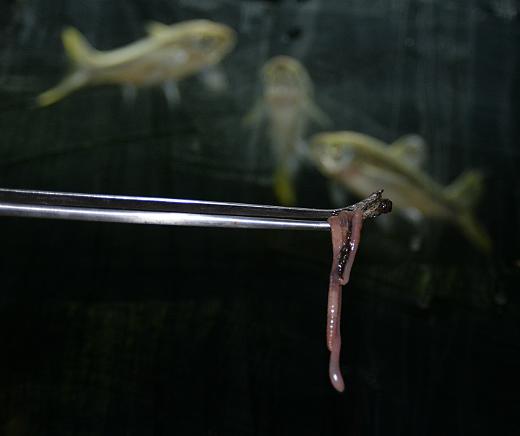 Feeding native fish can be a problem.  I have kept some that never learned to accept dry food.  Others, notably minnows and sunfish caught very young have taken presoaked pellet food within a day or two.  Frozen food prepared for tropicals will suit some finicky palates, but I’ve found it helps to have a reputable bait shop nearby.

Setting up a native community is like setting up a tropical one – times ten.  Most sunfish are scrappy and are not to be trusted with smaller fish of their own of any other species.  According to sources I’ve read, the same is true of catfish, though I’ve never had the juveniles molest another fish.  Be prepared to remove one or several bullies.

In Iowa, we acquired one real incorrigible large mouthed sunfish called a warmouth.  Warmouths were relatively rare in that area.  Every fish it encountered it either ate or harassed to death.  It refused to touch prepared food of any kind.  We finally surrendered and gave “Bert” a name, his own private tank, and all the nightcrawlers, minnows, and crawdads he could eat.  Mostly he ate and threw tantrums.

The best medicine I’ve found is prevention.  Take care to collect your fish from the cleanest sources possible.  Quarantine newcomers before introducing them to an established community.  Isolate any real troublemakers.

Lately I’ve encountered two parasites: water leeches and the so-called Black Spot disease which makes some fishermen discard edible fish.  The water leeches are tiny, white, and threadlike.  They are usually found attached to the caudal fins.  I remove the leeches by holding the fish in a net and carefully scrape the leech off with a fingernail.  Black Spot, scientific name Neascus, is a parasite that lives under the fishes skin and is so named because an infestation makes the fish appear to be sprinkled with pepper.  Neascus is a three-staged parasite, spread when a bird eats a fish.   There is no cure that I know of, but the parasite does not hurt the fish, nor will it spread to an aquarium environment.

Plenty of internal and external parasites afflict natives, and I haven’t seen much about them in aquarium literature, with the exception of the old standby Ick.  A good resource for disease identification is the pathology lab at the DNR.  Aside from that, experiment.  If the need arises, I plan to try some of the old standby remedies, such as salt baths.

I believe the appearance of native fish in aquarium shops signals a growing interest in our local species.  Perhaps it is an outgrowth of environmental awareness, or simply an appreciation of nature closer to home.  I hope this article has given anyone considering native fishkeeping enough information to get started in this fascinating aspect of our hobby.