As fanciers of the Apistogramma  species (we now have seven species) we find the A. borelli is one of the prettiest without being gaudy.

We purchased five A. borelli fry at the 1990 ACA convention along with A. steindackneri and A. commbral (we lost this one) and Pelvicachromis subocellatus.

The A. borelli is found in South America from Paraguay south to Argentina. Quite small and peaceful, this cichlid is very shy and wants to hide except at mating time.  The male is medium to dark brown in the body with beautiful blue fins (dorsal, anal and ventral) - thus the "Blue Dwarf".  The fins are sometimes tipped with white and the caudal fin is a yellowish brown ·color. The female is very plain in color except when spawning at which time she takes on a yellow glow with a dark lateral line very similar to the A. caucatoides at spawning time.  The male grows to about 2 1/4 inches (although the book says 3 inches plus) and the female is about 1 1/2 inches maximum. 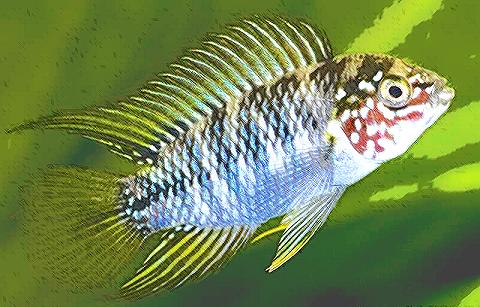 The water for this species should be soft with a pH of 6.0 to 6.5. We do not have an RO unit yet so we have raised and bred these in water from our water softener.  A temperature of 80 degrees Fahrenheit seems perfect for growth, spawning and raising the fry.  We added some salt to the water (about 1/4 tsp. per gallon) and a small amount of Epsom salts (about 1 tsp. per 10 gallons).

The A. borelli will eat most foods, including flake, although we prefer to feed newly hatched brine shrimp, glass worms and frozen brine.

A ten gallon aquarium seems very adaptable for a colony this size.  As with most cichlids the dominant male will keep sub-dominant males in check but I have not seen him injure any of them.  The female gets very dominant at spawning time and can and will kill another female if there is not enough hiding places for them.

The spawning of A. borelli is very similar to other substrate spawners or "cave spawners" We used 3 inch long pieces of 1 1/2 inch diameter P.V.C. pipe with one end capped and placed two or three of these units in each Apisto tank.  These make great "caves” and gives the males a place to guard until the female is ready to spawn.  The mating dance of these species is most spectacular when they both are displaying their finest colors. 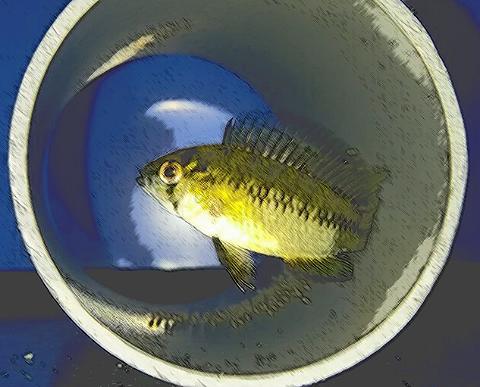 The female lays brownish-red eggs on the roof of the "cave" and the male takes turns with her so he can fertilize them.  The female will guard the eggs while constantly fanning them. She is very intolerant of the male or any other fish while with the eggs and she will aggressively attack them to keep them away.  The eggs hatch in three to four days depending on the temperature and the female will continue to guard over them.  The female has been known to eat the fry at this wiggler stage if she feels she cannot protect them.  If you have an aggressive male or another female in the tank, I suggest you pull them at the time of spawning.

The fry become free-swimming in about three days (six total) and should be fed microworms or A.P.R. (artificial plankton rotifer) or another infusoria.  Once free-swimming I have not noticed another A. borelli eat the fry.  After one week they can easily eat newly hatched brine shrimp.  The young seem to "school" until they are about two weeks old.  We remove them at this time to ease tank crowding and to give them room to grow.  We only get twelve to thirty fry at a spawn but I have heard of spawns up to one hundred.  The fry are very slow growing so we suggest very frequent water changes.

If you haven't tried raising or breeding Apistogramma borelli or any other Apisto, I think you should give it a try.  It can be very rewarding.

Subnote: If you are interested and cannot find any at your local aquarium shop, talk to someone in your club that raises them or someone who belongs to the A.C.A. or the Apistogramma Study Group as both of these clubs have “trading post” sections where you can order the species you would like to try.