Fish Pairs: a Note on Togetherness

I never really knew just how sick some people must have thought I was for keeping so many aquariums. I'll bet they thought I had Hole-In-The-Head or something. Not 10, not 20, not even 30 was enough for me. I had to have a tank for every 2 or 3 species that I wanted to raise, breed, collect, or just have around for the heck of it. My want list contains some 300-400 species of fish. Being a rather large list it is without much question or doubt that I just do not have the room, time or money to deal with the 150 to 200 aquariums it would require to keep all these fish around. I would have to rent an extra apartment just to keep the fish food in.

To keep myself both more sane and in proper perspective, as well as financially solvent, I have succumbed to keeping a mere 35 to 60 tanks going at any one time. I have realized that life will be long enough to allow myself all the fish keeping that I can handle with that number of tanks.

Fish are very fascinating and beautiful no matter what the size or shape or color they may be. Of course there are the "Dirty Dozen” that I hope never to breech my doorway or splash in my water, but by and large I love them all. 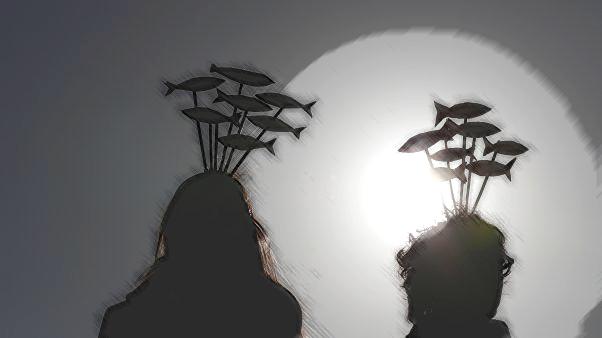 I have in recent times acquired a partner in my fishkeeping ills. She has thus far proven to be no less sick than I and has caused me to have a major revision, of some of my earlier reasons, for not keeping thousands of gallons of water, held in glass boxes, all around my home.

She was filling out a fish wish list of her own one day. I got a bit of a chuckle when I saw that there were only 75 fish on her list, That is until I realized she had only gone through one small fish book that contained pictures and descriptions of only 50 fish and she was headed for Axelrod' s Atlas next. I began to panic. "What if she tries to take over my whole fish room?" I said to myself. And worse, what if she insists on keeping one of those ... those ....I tried not· to choke as I said ... "Dirty Dozen?". I began to sweat. I went to the bedroom hoping to awaken and find out I was just having a little nightmare. I kept thinking "No Oscars, PLEASE?".

Sometime later I awoke to a voice calling my name. I proceeded down the steps and there she was, looking as cute as ever, with no fewer than 15 fish books in front of her on the table and a stack of papers that SHE called her fish list. This stack made Tolstoy's “war and Peace" look like a thin little paperback in comparison. I sighed and decided to oblige her with giving it a quick scan. As I began looking it through I paid close attention for any of those that would require that I make a mad dash for the antacid tablets. I was about half-way through it and asked her “Oscars on here?". "Ish ... Mick Jagger Lips with fins? .. No Way!" came the reply. "Goldfish?" I asked. She just stuck her finger down her throat and started to gag. "Pirahna?". "Nope!" she said. What a relief it was to hear that.

We spent most of the rest of the night comparing our fish lists. She even got me to lift my objections to Pink Convicts but only after she lifted her objection to trying to breed Arowanas in a 750 gallon vat I have been thinking about making. I'll have to remember to get her a Valentines fish next year. We talked about breeding fish and setting up the fish room to accommodate our growing needs and generally had a great time that night in spite of all the worries I had earlier.

I am very thankful to have met this person. Someone to share all the wonderful fish stories with, to argue the finer points of sponge filters with and to wonder why it is we always seem to be looking at the exact same fish in a tank when we go to the pet shop together. It is heaven to have a fish partner. I feel truly sorry for all of those fish singles out there. This is a hobby that is best when shared with another person. That is where the fun is, in the sharing.

To all of you fish pairs out there I salute you.

Some of this story is slightly exaggerated, but in the end it is still true and unlike catching fish in a lake the best story here is about the one that didn't get away. ‘Nuff said.