The fishes most known for coming out of Australia and Papua New Guinea are the rainbow fishes. Varying in size and colors no one can deny the attraction of these peaceful fish. But rainbows aren't the only colorful freshwater fish out of Australia and New Guinea - there are many different Gudgeons and Gobies also suitable for the aquarium although they aren't so commonly seen in the hobby. One such fish is the Purple-Spot gudgeon, Mogurnda mogurnda. 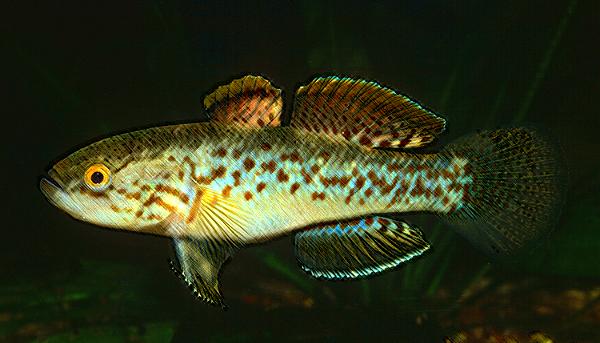 M. mogurnda are distributed throughout Northern Australia and Southern New Guinea. In Australia they extend from the Fitzroy River of Western Australia eastward through the Kimberley region and Arnhem Land to the Gulf of Carpentaria drainage of Queensland. They've been found in rivers as well as muddy waters and is locally abundant in rocky pools of the Kimberley and Arnhem Land regions. They will do well under normal water conditions with a temperature around 75 degrees Fahrenheit and a pH of about 7.0-7.5. They tend to be open spawners so several rocks and/or pieces of slate will be needed if you intend to spawn these fish. They normally grow to about 6 inches and are colored a brownish color on top, more cream-like on the bottom and a light blue on the sides. Redish-purple spots cover their body and form lines from the eyes to about the gill plates. Their fins are generally clear to slightly dusky, sometimes with a yellow tinge. If you catch them in the right light their eyes will flash a blue color but whether this is just reflected light or whether their eyes are a dark blue I don't know, l’ve never heard them described as a "blue eyed".

We had five of these fish which we kept in a bare 40 gallon aquarium with two Botias and one lonely Keyhole cichlid. We had no idea if we had a pair and literature on M. mogurnda was almost non-existant so we had pretty much given up on them, figured they were all the same sex and concentrated on the other fish. We managed to remember to drop some food in the tank once a day and periodically checked to make sure they were all still alive but otherwise we ignored them. On one of these periodic checks I noticed they looked a little sluggish and their fins were getting tattered and thinking back to when their last water change was (I couldn't remember) I thought now might be a good time to give them one. I did another 10 percent the next night and on the third night I decided they looked much better and I went back to ignoring them.

A week later I saw one of them hanging out in the back corner and another with a big chunk missing from his caudal fin. I was about to get the ammonia test kit out when I took another look at the M. rnogurnda in the corner. Immediately I went tearing up the basement stairs to the livingroom where my husband was watching television and exclaimed “the Mogurndas spawned!  He looked at me, slightly confused, and said "What?"  I repeated myself and we both ran back downstairs. The fish was still back in the corner guarding a large batch of eggs scattered over a piece of slate.

Knowing the eggs wouldn't last long in the tank with the Botias,...

...we transferred them to a ten gallon aquarium with the slate leaning against the side of the tank. We suspended an air stone along side the eggs to keep air moving over the eggs. 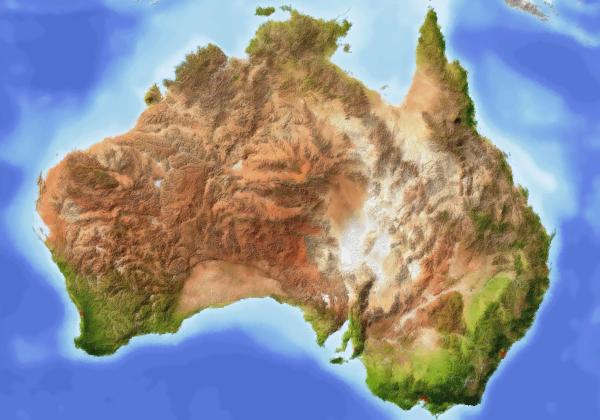 Going back to the parent tank we watched the M. mogurndas hoping to spot which two had paired off. The one was easy enough. He continued to chase all other fish from the back corner and was dejectedly looking for the eggs. It was a little heart-wrenching to see him desperately search the area but the next day he and another fish were cleaning another piece of slate at the front of the tank. Hardly daring to believe they were willing to spawn again so soon (I figured maybe the eggs were older than I at first thought) I moved both fish to a twenty gallon, then watched them spawn two hours later. I guess when they decide to go at it they don't let anything stand in their way. This batch - easily as large as the first - we decided to leave with the parents to see how they would be cared for.

The eggs started hatching in about ten days (we lost half the eggs in the ten gallon due to fungus) and the male M. mogurnda guarded this batch, which started hatching two days after the ones in the ten gallon. The female stayed hidden in the corner of the tank and as soon as the eggs had hatched both parents ignored the fry and spawned once again. This time he got very aggressive towards the female and since we didn't want too many M. mogurnda fry we removed her from the tank and let the male care for the new batch in peace. All current fry were doing fine and being fed green water and microworms until large enough for baby brine shrimp.

We started loosing the fry in the tank with the male after the second batch layed in that tank hatched, whether because he started eating them or not we don't know but eventually they all disappeared. When the fry in the ten gallon were about 2 1/2 months old we decided to try to spawn the parents again so we placed the female back in with the male. We believe she was more than ready to spawn but he was not and as a consequence she beat the living daylights out of him - literally. We went down stairs one night expecting to find eggs and instead found a severely battered male M. mogurnda. We immediately removed him to an isolated tank but in two days he died.

We’ve now got the female back with the other M. mogurnda in a 75 gallon aquarium with some rainbows, those two Botias and an Aequidens portalegrensis. We don't know if we have another male in with the remaining fish but we still have about a dozen fry for future spawns if we so decide. Meanwhile we keep our eyes out for other species of Gudgeons and Gobies as well as looking for Literature about these seldom seen fish and maybe someday we’ll even go "foraging” for wild species. Well, it's nice to dream anyway.