The only people who might not be familiar with the Pearl Gourami would probably be people who are not familiar with the tropical fish hobby or people just getting started. These fish are not an uncommon fish seen only so often in exclusive aquarium fish stores, rather it is a fish seen from small out-of ­the-way pet shops to the large 100-plus-tanks fish store.

This article is to introduce the new hobbyist, and perhaps, to more familiarize the more experienced fishkeeper to this beautiful fish. 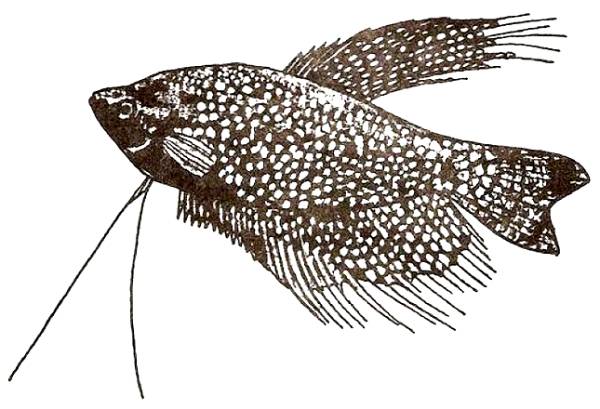 Trichogaster leeri, or more commonly known as the Pear Gourami, was first described by Bleeker in 1852. The fish was named after a colleague of Bleeker's, a Dutch doctor named van Leer. The fish was discovered in the stagnant waters of Indonesia, primarily Sumatra, Borneo, and the Malayan Peninsula. Seldom are they found in open water, usually only in shallow, thickly planted ponds and lakes with free water only at the surface. The labyrinth organ, a specially designed organ allowing all Anabantoids to go to the surface of the water and take a gulp of air, enables the fish to live quite comfortably in these stagnant waters.

To spawn these fish, a 10 gallon aquarium is of sufficient size. The male will build a bubble nest by blowing tiny bubbles right at the water's surface, generally without any plant material. The spawning goes on beneath the nest and the eggs, which are lighter than the water, will float up into the bubbles. The male will catch most of the eggs that don't head up to the nest and will spit them out where they belong. He will also do this to the fry, after the eggs hatch, if they happen to fall out of the nest. After the fish are done spawning, the female should be removed since she does not help in tending or guarding the eggs and the male may see her as possible danger and injure her while he guards the nest.

These fish are generally peaceful and can be kept in a community aquarium with other peaceful fish. They are fairly hardy and will eat most all types of food. They are an easy fish to keep and spawn (they gave me my first 10 BAP points) and their availability makes them very easy to acquire. May you gain as much enjoyment from them as I have.