Barbus arulius is a beautiful, fast swimming, schooling fish that we had obtained at one of the auctions in Iowa. When we purchased these Barbs, originally of the genera Puntius as described from southern India by Jordan In 1949, we did so because we thought they would make great dither fish or target fish for our cichlids.  They did prove to be a good dither fish due to their fast, jerky swimming motions.  They almost intimidated the cichlids. 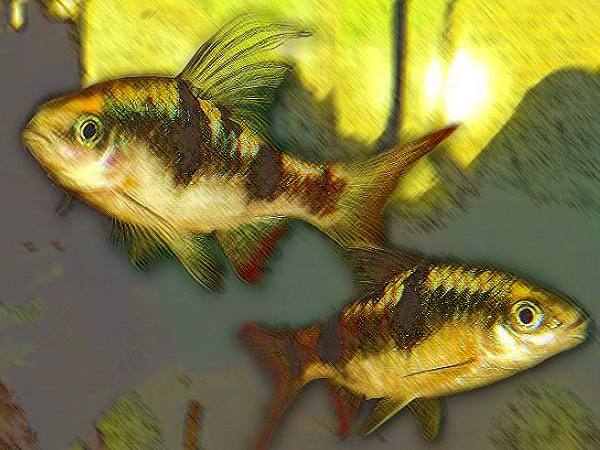 Observing the fish in their full spawning dress one evening we thought, why not try to spawn them? When I say "spawning dress" I mean their spawning colors. The brick red described earlier enveloped the male from the front part of the dorsal fin and became more intense towards the caudal fin.  The female also turned red but not to the extent of the male.

breeWe moved the group to a 10 gallon tank set up the same way we did when we spawned Long-finned Rosy Barbs with one exception, marbles were placed on the bottom of the bare tank.  Over these we placed two pieces of plastic mesh, the kind used in crafts for stitching yarn.  This wants to float so a couple of rocks on one end and either a sponge filter or box filter on the other end keeps it in place.  The water conditions were soft, 6.5 pH, and about 75-78 degrees F.  We also use aquarium salt at a rate of 1/2 teaspoon per gallon and Epsom salt at 1 tablespoon per 5 gallons.  The tank was set up on a stand with an open bottom.  This gave us the opportunity to look up under the marbles to spot any eggs.

Feeding live or frozen foods often help to fatten the females prior to spawning. When the spawning ritual occurs it's similar to watching a sharks feeding frenzy as seen on T.V.  This activity lasts from 45 minutes to a couple of hours.  The fish, however, carry their colors for a couple of days.

A peek from the bottom shows some eggs laying on the glass between the marbles.  The eggs hatch in about 30-40 hours. A close watch is necessary at this time.  If the eggs are fertile and hatching takes place we want to remove the adults as soon as the fry are free swimming enough to make the trip up past the marbles and through the mesh.  We could pull the adults as soon as the eggs hatch but I feel the constant swimming motion from the adults keeps movement of water down to the fry instead of it being stagnant.

When the fry are swimming we feed them a mixture of green water and A.P.R. (Artificial Plankton Rotifer).  The mixture is fed for two weeks, three times a day until the fry are large enough to eat live baby brine shrimp. Egg yolk (hard boiled) could be used instead of the A.P.R. but I don't like the mess.

We are very cautious about making water changes on fry before they are a month old but we found that this species did better with 20% changes every week until 2 months old.

These fish are said to reach 4-1/2 inches but I have not seen any over 3 inches, including those that won their class in our last show.

So the next time you're at your favorite fish store take a look and see if they have any Barbus arulius to add to your collection.  They do not seem aggressive and although our books say that they are difficult to spawn, we found it a challenge but not hard.