Lenny Ancheta's letter to me in the last AquaNews illustrates a common but rarely discussed problem in fishkeeping — the problems in behavior that sometimes result when transferring fish from person-to-person, or even aquarium-to-aquarium.

I had raised a colony of six Melanochromis johanni from babies and had never encountered any problems with aggressive behavior, despite the nasty things said of its territoriality and intolerance.  I wound up with a breeding colony of a male and five females which lived peacefully in a 20­ gallon long aquarium with abundant rock ledges.  After harvesting more fry than I needed, I auctioned four females and put the remaining pair in a 30­ gallon African community tank with some Pseudotropheus aurora and Labidochromis zebroides.  There was much chasing but no hostility.  I then gave the pair to Lenny and the male turned vicious, killed his longtime mate and terrorized the other tankmates.

This pair lived together in a half dozen different situations with nary a bit of difficulty.  The size difference was minimal.  Lenny is an experienced, conscientious fishkeeper.  The Metro water supply is not known to induce insanely aggressive behavior (except among state legislators in May).  I have found the same group of fishes to act differently in different aquaria" even side by side with identical water and decorated with the same plants or rockwork.  Authorities recommend that the rockwork be changed and established fish be removed and then reintroduced when adding a new African cichlid to a community situation.  This supposedly cuts down on territorial battles for those of us without the space of a 125 gallon aquarium.  This is also recommended, I recall, for some marine fishes; I think however, that Lenny did rearrange the aquarium to no avail.  In all probability, there was nothing he could have done to save the marriage. 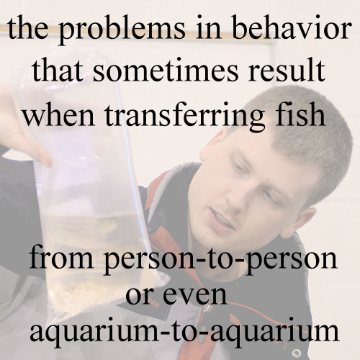 We know that behavior can vary enormously in different fish of the same species.  As a teenager I once kept a 5-1/2 gallon aquarium with a male Betta, a one-eyed Tiger Barb and a female Molly too mean to keep with anything else ­- a molly with attitude!  She took a liking to the Betta, chased off the Tiger Barb every time it circled to nip and the molly and the Betta swam about side by side with such affection that I kept watching for a bubble nest!  In another aquarium I had a large, amiable Blue Acara (Aequidens latifrons) that befriended baby feeder guppies and tried to herd them around like fry of his own.  I have yet to hear of a fancy goldfish with attitude, but what can you expect from a fish that has difficulty breeding or moving their bowels without human help?  Anyhow, even recognizing that individual fish have individual personalities does not help us here, for Lenny's male johanni had been a regular boy scout until I gave him to Lenny.

I believe that the most plausible solution to the mystery of his mad johanni clears up a problem I have had — reconciling my own experience with Africans with the commentaries I read in books.

The volumes in question warn repeatedly of hostile territorial aggressiveness with male African cichlids, portraying them almost like Pirahna raised on human blood.  My experience is almost completely contrary.  I tend to house 30-40 baby Africans in tanks of 15-20 gallon capacity and thin them out till I have a breeding colony of 1­3/4" to 2-3/4" young adults in one of my 20 longs, 30s, or special 26 gallon tanks bought from a defunct Hartz display, with plenty of rock caves and crevices.  I rarely experience behavioral problems.  But because of space limitations and due to my mad quest for BAP points, I invariably trade off my breeding colonies before they reach full maturity.  Paul Loiselle (The Cichlid Aquarium) advises the use of young males as breeders, not show quality males that have grown too mean.  My few encounters with keeping show quality male mbunae bear Loiselle out.  I raised a male Pseudotropheus aurora to nearly five inches, the most peaceful of fish 'till he hit full growth and turned into a bully.  Mr. Mike Evens gave me a magnificent five inch male Haplochromis nubilis I had to trade in on a smaller model, as it was terrorizing three sizable females in a 30 gallon tank with abundant rock cover.

I had always guessed that the terrifying book descriptions of African rift lake cichlid behavior differed from my experience because the authorities observed wild-caught specimens and I obtained the babies of domestic stock, mellowed further by the calm charm of brothers Gromek, Nordby, and Schreyer.

What I now believe is that most male African cichlids mature to a point of sheer cussedness where a person has to trade or sell it, keep it by itself as a show entry – or filet and eat it.  I venture the opinion that by coincidence my male johanni made the transition from good citizen to killer-cichlid-from­-Hell just as poor Mr. Ancheta became its owner.