The History of Goldfish

According to one legend, the Chinese province of Shen-Si suffered from a prolonged drought during the reign of Emperor Ping-Wang.  The starving people prayed to their gods to dispel the drought.  The gods took pity on them, and soon ample rain drenched the countryside and springs gushed from the rocks.  The goldfish appeared with the water as a gift from the gods to suffering mankind.  ….  [Another] legend recounts the story of a very lovely girl, even more beautiful than the dawn.  She was in love with a young lad who had left her.  The girl cried bitterly for her unfaithful lover. Her tears falling to the earth like pearls, awakened the beautiful goldfish to life.

The goldfish, far from the varieties we rear today, first appeared in eastern literature nearly 2500 years ago.


While it is romantic to think of them as gifts and companions of the gods or summoned to life by the tears of a beautiful girl, goldfish are actually the descendents of the Gibel carp, Carassius auratus.

As is the case with most cultural characteristics, religion and politics played a major role in the domestication of the Gibel carp.  Chinese Buddhist monks of the Tang dynasty (618-907 A.D.) began building ponds and rearing various aquatic wildlife including golden colored carp.  Up to this time, carp had been left in the wild due to their sanctity.  Given their divine status, it seems only natural that the Buddhists would be the first to give them shelter.

The first Chinese hatcheries, stocked lakes, were founded in Kiahsing, Luho Pagoda and Nanking during 968-975 A.D. At this time, legislation forbidding the consumption of red and golden fish was strictly enforced. 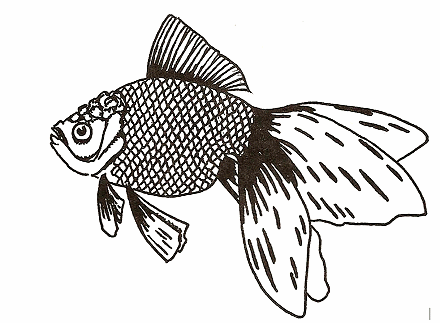 Most historians credit the domestication of the goldfish to various emperors of the Sung dynasty (960-1279 A.D.).  Regardless perhaps of which lord or lords are responsible, the golden carp was now reared in man-made ponds within the walls of the Forbidden City.  Various staff were employed in the rearing and breeding of palace fish. It is during this 300+ year period that the development of goldfish "varieties" began.  No longer were they simply golden fish, but red, and red and white fish as well.

If one could pinpoint a "Golden Age of Goldfish" it was clearly evident during the Ming dynasty (1368-1644 A.D.).  No longer were goldfish palace property, but the pet of the people.  Where financial limitations prevented many people from rearing goldfish in ponds, the porcelain container became an affordable alternative - the origin of the "goldfish bowl".

It was during the 16th century that goldfish hatcheries began to emerge as a leading, labor intensive, industry in China. Breeding methodologies were developed which remain in practice today.  Despite China's current political practices, hatcheries remain very competitive with one another.  Calculations for breeding particular varieties are still considered privileged information and are not shared with outsiders.

The first fancy goldfish varieties of China were the Red Cap, the Egg Fish and the Dragon-Eye, developed in the 1590's.  The Oranda and the Celestial were introduced in the late 1800's.  The Bubble-Eye and the Pearl­scale were first marketed in the early years of this century.

In 1603, Japan was the first country to import Chinese goldfish. Fancy goldfish were introduced in Western Europe a few years later.  America, however, did not begin importation until the 1870's.

The goldfish trade in China today remains a big labor intensive business.  But China is no longer the sole producer of fancy goldfish.  Japan, Korea, Southeast Asia, Hong Kong, and America are also skilled breeders and exporters - each producing particular and sought after varieties.