Killies from a Beginner's Perspective

It was after visiting the fish room of Craig Rees and talking about Killies that I decided to keep some myself. My first impression of Killies was that they would be nice looking fish, if you could see them.  However, not only do some Killies get over 4'' long, but you get used to their small size.  There are many advantages to keeping Killies that make them a good beginner's fish.  I will list a few here...

Killies would be excellent for someone just starting out.  A young person will have plenty to hold their interests, changing water in egg and fry containers and collecting eggs every day.  Killies are carnivorous so collecting live foods is not only interesting but beneficial. Otherwise glassworms, blackworms, or brine shrimp work well.  As a standard fare, dried or frozen bloodworms and frozen brine shrimp work.  Fry can be started out on microworms, and later, baby brine shrimp added.  For a person with limited space, Killies would be ideal.  If you live in a newer model home with one of those large walk-in closets, add a few shelves and you have a fishroom ready to be stocked. 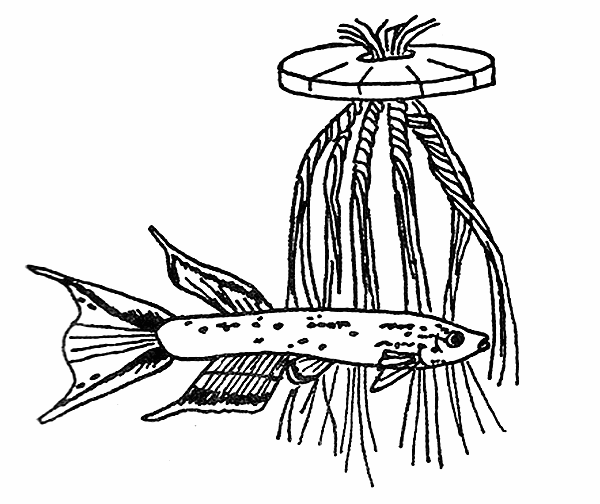 I would like to deal with one of the main reasons people shy away from Killies fish.  WATER QUALITY.  It is not as bad as it sounds, Killifish need soft water, but it is on a scale that is easy to deal with.  Killifish are not as picky as some fish, like Discus or Neon tetras for instance.  Craig Rees uses a combination of distilled and tap water that measures out at 7 - 10 dh (degrees hardness).  Before you say ''Distilled water! What a pain in the neck!", add it to your weekly grocery list.  Bring along a couple of your 1 gallon milk jugs and buy it from the machine at your local store (Cub or Rainbow have it).  This may not even be needed.  Get a test kit and measure your water hardness, If you are below 10 dh your water will probably be alright.  I use half distilled water and half peat treated tap water which comes out to about 5 dh.  You may be able to get by with using only peat water. I stuff a nylon stocking full of peat and let it sit in a 5 gallon bucket filled with water for about a week.  When it comes time to use it it's at the right temperature and is ready to go.  You may even be able to get by without this depending on the test results of your tap water.  If your tap water measures out suitably then just treat it to get rid of the chlorine or chloramines.

Most Killies available come from hobbyists as very few pet shops stock them.  Let me take this time to divert from the subject a little and get on my soap-box.  You very often go into a pet shop and see customers buying goldfish and a bowl.  Goldfish do not belong in a bowl.  A fish that potentially gets to 12'' and weighs more than a pound does not belong in a bowl.  I’m surprised we are not seeing more Oscars in bowls.  Goldfish are messy fish that eat a lot and need a lot of space.  Even if it is just a feeder it deserves better than life in a bowl. Also, small schooling fish may survive in a bowl but should be kept in an aquarium large enough to to provide room for swimming.  Nothing looks more idiotic than a small school zipping back and forth in a 12'' bowl.  it's like watching a miniature tennis match. Killifish, like Bettas do well in bowls.  They do not need a lot of space to swim in.  The only time that they move fast is when they want to eat or reproduce. (Ladies, is this the description of your husband?)

Instead of sending new people in the hobby down a dead-end path, why not steer those who do not want a large or expensive set-up towards something more practical.  Killifish may seam impractical at first glance but they are not.  Killifish may seen expensive because they are not mass produced.  If there were more demand, someone would find a way, believe me.  A couple of possibilities would be Aphyosemion seriatim or some of the Fundulopanchax gardeneri species.  Both are easy to keep and fairly prolific spawners.

The first experience for newcomers to the hobby often ends with the belief that fish are hard to keep and die easy.  It would be to the benefit of those in the pet industry to help foster knowledge and interest increase their customer base.  If the customer is buying anything less than a 5 gallon tank, they would stand a much better chance with one of the hardy Killifish than they would with a feeder goldfish.  Bigger is not always necessarily better.  Over-crowded tanks and fish being kept in tanks that are too small for them has to be two of the most common problems among beginners.  On the other hand, a fish that is colorful, interesting, inexpensive to keep with limited filtration and space requirements adds up to a good beginners' fish in my book.  How about it pet shop owners?  It starts with you and your employees becoming knowledgeable and enthusiastic about Killies.  Help us get the word out about the all too often over looked killifish.