Yes we're talking the language here and not the race.  O.K. although I am unofficially changing my name and have moved this off of the editors page it is still a lesson in how to talk like a real fish keeper.  I will give you a little history here first and then never mention it again...

My pet peeve is not pronouncing scientific names right. It even bugs me when I do it. I hope all can keep this column in the jestful form that it is meant to be but if not?......... Oh well.

Yes, in the last issue I did get a little out of hand by picking on those poor African cichlid people but I have to admit that if they spent half as much time figuring out how to say the their fish’s names as they do drooling over a fish with a mouth-full of eggs we could probably get me to stop with this all together, I would like to apologize to all of those African cichlid keepers that I cut on.  After all I have found out that they really aren't the worst at pronouncing names, People that keep and breed Betta splendens are far and away worse then the cichlid folks are.

People that keep Betta splendens not only can't figure out how to say the names properly, they get defensive and even arrogant if you try to correct their nomenclatural slip-ups.  First they say, "Like I have a cold and you just didn't hear me right".  Then they throw their heads back and point those snoots of theirs towards the sky. Then they look at you as if they are saying "How dare you correct me, I keep Bettas”!  Gimme' a break!  What kind of person is it that likes to keep a fish that is constantly trying to eliminate its own race. I mean this fish has all it can do to keep its fins intact in a community tank situation.  I am nearly convinced that the people that keep Betta splendens are just feeding on their own masochistic tendencies.  How can you like a man-made fish anyways, especially one that you keep in a brandy snifter.  Mother nature never intended them to be the way you are trying to make em. 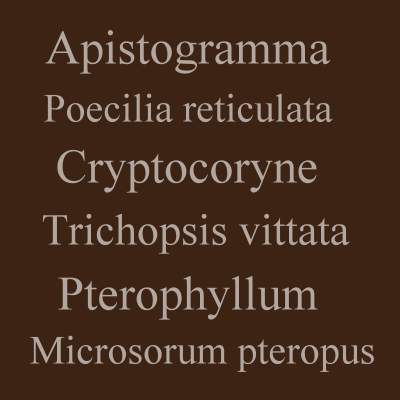 One day I heard one of these people talking to another of those people about one of my favorite plants, Crypt. balansae.  Well of course this person had to mispronounce the name as Crypt. balansee when the 'ae' ending of the species name is supposed to be pronounced aye, as a long A.  I also told this person that is usually meant that it referred to its being named after a woman or was a reference to same form or structure of the plant or animal or it refers to the geographic location where it was found.

What a mistake that was!  This person went on a verbal rampage.

Accusing me of attempting to undermine the federal banking system and told me that I was probably the type of person that spent all of my free time on a chicken farm trying to think of ways to bother people.  All of that because I was only trying to make them a more accurate linguist in the pronunciation of scientific names.  Mom always said not to try to educate a fool.  Well that was not the end of it.  This person told me I should go and vegetate like a Crypt. petchii. Well of course they did not pronounce the double i ending properly.  They said eye-ee for the ending but it should have been ee-eye, as a long 'e' then long 'i'. of course I had to tell this person that they said it wrong and that it usually was named after an Italian person kind of like spaghetti with an 'i' like spaghettii.  Of course I had to rub in their mistake by telling them to stop trying to insult the Italians by trying to call me one.

By this time we were almost ready to go into a round of fisticuffs (fighting) when I figured I would not look good in the eyes of the authorities if I beat the snot out of this woman.  As I was walking away she called me nothing but a "rotten macrocephala."  I had to admit to myself that I may have a big head but I was definitely not rotten and found it interesting that this Latin illiterate beast, actually may have some idea as to the meaning of macrocephala.

One more note that I would like to add is that if you see a species name, particularly a plant, with just an 'a' at the end, remove the 'a' and add an 'e'.  This is usually the way a name ends if it is describing a physical attribute.  An example is rotata.  Remove the 'a' and add the 'e' and you have rotate.

Next time I will tell you about those prissy people that keep LIVEBEARERS!