All Gobies are bottom dwelling fish that seldom exceed 10cm in total length although some reach about 35cm.  Most Gobies are saltwater species, inhabiting corals and sponges of tropical coral reefs, and of those that are non-saltwater, most are brackish. But not all.  Chlanydogobius eremius is one of the exceptions of this - being found in pools and streams in the central desert area almost smack dab in the middle of Australia. Hence the common name "Desert Goby"

As you can imagine, living in the desert is an extremely harsh way of life.  These fish are subject to extreme fluctuations in temperature and, in places, low oxygen levels.  In fact, the only good thing about this type of environment is that it makes a pretty hardy aquarium fish. 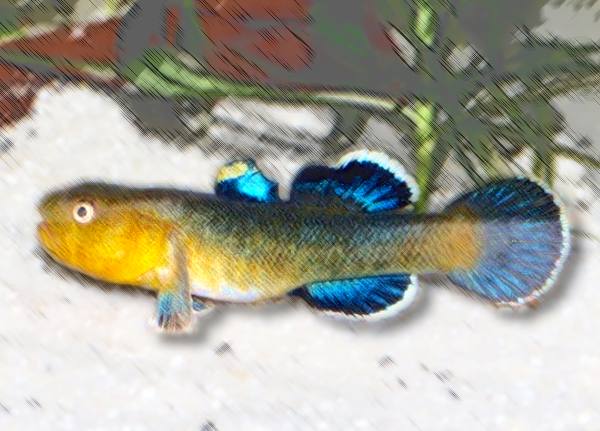 They are a peaceful fish suitable for a community aquarium although they are somewhat territorial, especially amongst themselves.  They pretty much stay on the bottom although you may find them suctioned on the side of the tank.  They are able to do this by pressing their pelvic fins, which are joined together creating one single fin, against the glass (or whatever).  This is a feature exclusive to the Goby species and helps to distinguish them from Gudgeons - a completely different fish.

Spawning these fish is outrageously easy.  If you've ever spawned a cichlid then you're already familiar with how these fish spawn.  There are differences, though.  A ten gallon tank is plenty big for a single pair for breeding.  Put at least two 1-2 inch PVC tubes about 4-6 inches in length in with the fish so they have more than one spawning site to choose from and also so the female has somewhere to retreat if the male becomes too aggressive.

The female will become noticeably plump when full of eggs and will deposit up to 200 eggs inside the PVC tube.  Like cichlids, the eggs are adhesive and will stick to the PVC surface.  The male will fan and guard the eggs so it's' all right to remove the female at this time although I've never had a problem with leaving her with the male unless she manages to get inside the tube to eat the eggs.  This is more of a problem with a colony of Gobies where the male is busy keeping the other fish away.  Even without the female in the tank the male won't stand guard over the eggs constantly but instead will be in and out, fanning the eggs only periodically.

You can also pull the eggs as soon as they are laid.  I prefer to do this because they have a tendency to fungus from inattention by the male.  I would set the tube against a rock or something so it's at an angle and then place an airstone at the lower opening to keep water moving through the tube and over the eggs.  All parental care is abandoned as soon as the fry hatch so if you leave the eggs with the male after spawning, at least pull them before they hatch (which occurs in about 12 days).  The young become free swimming in about 24 - 48 hours and can be fed microworms right away.  After a couple of weeks you can start feeding baby brine shrimp, daphnia and cyclops.  You can also start your water changes at about this time, taking about 10% of the old water and replacing it with new about once a week.  The fish will start to become sexable when they reach 2.5cm and are able to breed at about 5cm.

Gobies are not a common fish in my area (Southern Minnesota) but when I do come across some I rarely pass them up.  Once I got to know their unique personality and challenge of spawning some of the more difficult species I became hooked for good.  If you want something a little out of the ordinary, easy to care for and spawn, along with being suitable for the community aquarium, why not consider the Desert Goby?  You won't be disappointed.

For those of you already familiar with some of the Gobies, or are just interested, but are frustrated with the lack of information available on these fish, a new study group is being formed dedicated to the Gobiidae family.