Tankmates for Africans – or Getting Hooked on Rainbows

About four years ago we became interested in African cichlids.  Their bright colors and interesting behavior were very different from the other fish we have had in the past.

It soon became apparent that keeping cichlids together created some problems.

The males would kill each other and the females were not the friendliest either.  They would hide in the rocks, fight with each other and occasionally spawn.

After reading The Cichlid Aquarium by Dr. Paul Loiselle, we decided to try rainbows as dither fish.  Loiselle defines dither fish as “.... active, midwater - dwelling species used to overcome the tendency of many cichlids to hide in captivity." 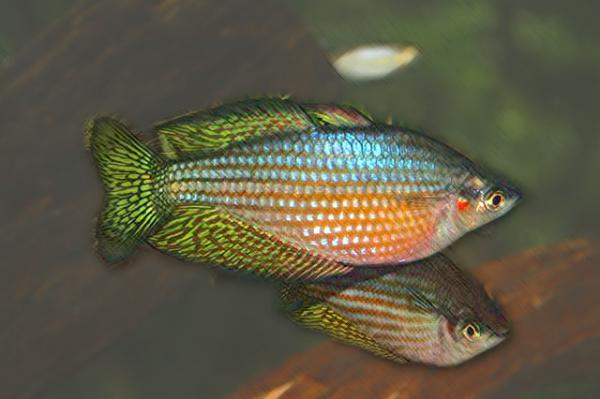 We went to the store and bought some Melanotaenia splendida, the cheap kind from the far east.  After just a few days in the cichlid tank the male Melanochromis johanni was out swimming and chasing the female, doing his dance and showing off his colors.  When the cichlids would feel aggressive or would be trying to spawn they would chase the Rainbows, but they would never catch them.

Soon we had cichlid fry and the Rainbows were spawning too!  This was great! Two types of fish to BAP and no murders in the tank.

As the numbers of tanks grew from buying more cichlids, we needed more Rainbows.  Soon we had more types of Rainbows, like Melanotaenia bosemani, M. lacustris, M. axelrodi, and Glossolepis incisus, and more.  All was going well and not one Rainbow was killed by the  not-so-nasty-after-all cichlids.

We had beautifully colored mouth brooders and Rainbows living and spawning together.  One day we noticed we had fifteen types of rainbows and only five types of cichlids. HOW DID THAT EVER HAPPEN I WONDER?