On the first Saturday in May I joined several other MAS members for an expedition to collect darters.  I did not know what a darter was, but the opportunity to collect fish was exciting.

My take-home portion of the catch was a Slenderhead Darter, a Banded Darter, and five Johnny Darters. On Monday I discovered a spawn.  Though the Johnny Darter (Etheostana nigrun) has been observed spawning in a laboratory setting, at the time of this writing this species has only one registration among FAAS's 23,000-plus registrations.

None of us in the expedition knew exactly what species we had until we came home.  With the aid of the April, 1991 issue of TFH and some library books I was able to identify my tank's holdings.  Of particular help was Fishes of Wisconsin (George Becker, 1983).  This 1000 page book provides thorough detail on all fish (including darters and killifish) found in this area. Many of the facts in this article came from it. 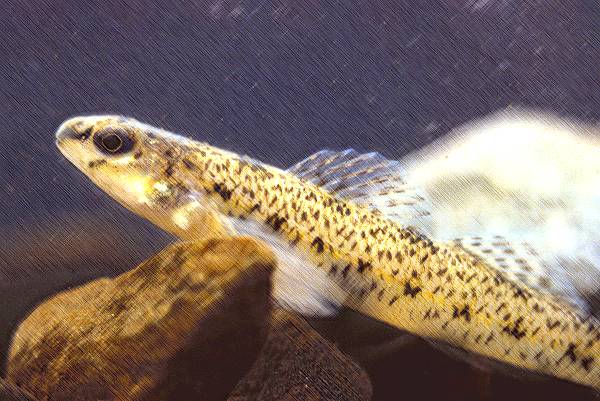 The Johnny Darter enjoys the largest distribution of all the darters (from Mississippi to Hudson Bay, from the Dakotas to New York).  It is supposed to be one of the hardiest darters, but it is also one of the least colorful.  The adults are medium-light brown with black markings.  These markings along the lateral line form m's and w's.  All sport a split dorsal fin and lack a swim bladder.  The Johnny Darter usually rests on the bottom and turns its head sideways as if it had a stout neck. As suspected, it darts about the bottom.  All my darters are now eagerly taking daily offerings of frozen food (blood worms and brine shrimp).  I keep them in a 20 long with four large stones amid gravel.  A power head at one end and an air lift tube at the other provides the darters' preference for a strong, swift current.

On Monday, two days after the collection, I noticed that the heavier fish were much thinner.  With excitement I surveyed the tank. Using a baster I retrieved something that looked shiny in the gravel.  It was just part of the gravel but a distinct sphere floated up from the spot I disturbed.  It was clearly an egg!  In nearly an hours' time I had proudly collected 18 eggs from that area of the gravel.  Next I tried the less delicate gravel siphon.  With only a few exceptions, I obtained over 150 unbroken eggs in about 30 minutes.  My enthusiasm dampened somewhat when I noticed some fungus setting in on the retrieved eggs which were setting on the bottom of a Tupperware container.  I quickly set up a breeding net and poured the eggs into it.  They were contained but received steady circulation of water.

Then I saw what I should have from the start.  Adhering to the near corner of my tank were an abundance of eggs! The silicon sealant had concealed these nearly transparent spheres.  I counted as best I could and the total reached the mid 200's.

About an hour later I noticed one of the smallest darters guarding a marble stone. Sure enough, well over 100 eggs composed a 1-2" diameter patch laid mostly in a double layer.  The stone's pattern disguised this batch.

Later that night I observed the guarding darter picking away at a single fungusing egg until it ate it.  Having a fear that the other darters might all join in on the feast, I inserted a tank divider between the fish and the eggs.  Unfortunately the divider reduced the water current from the power head, but an air lift-tube still kept water moving about on the eggs' side of the divider.

If I had to do it over, I would not have used a divider so that the male could defend his eggs and the current from the power head would remain direct. By observing some of the eggs fungusing when left in stagnant water I assume that a current would be beneficial.  The positioning of the eggs supports this--all were laid at the tank end which directly received the strongest current.

It was a few weeks later and a trip to the library before I was able to learn about the Johnny darter's spawning activities, which I had missed. Both the male and female are polygamous.  The male selects and defends a small territory.  Then he lures the female into their spawning position - side by side and usually upside down under a ledge. The female deposits the eggs one at a time.  This is incredible considering that nests have been found holding 86 to 691 eggs.  My estimate of observed eggs was in the 500's.  Just as I had observed, the guarding male eats eggs that fungus.  He has been observed rubbing the eggs with his dorsal and fanning them with his pectoral.  I made the wrong decision to separate the fish and the eggs.

Returning to my story, I had three batches of spawn: Nearly 200 eggs collected from the gravel and resting in a breeding net, over 200 eggs up and down the tanks corner edge and over 100 in an oval patch on a granite stone.  As I waited for the eggs to develop, I wondered if I was taking the best action.  Do I need a fungus guard?  Should the darter be allowed to guard the eggs?  How important is the current?  How long do the eggs incubate?  Will the fry adhere to the spawning surface the way Angelfish fry do?  At the time of my eggs incubation I was uncertain as to just what species 1 had.

My most interesting experience was observing the development of a few eggs that extended past the silicon sealant and adhered to the glass.

With my magnifying glass I observed that the eggs are about the size of Angelfish eggs.  They are clear except for a light brown tinge to the shell.  Each egg had a spherical yellow yolk.  On Monday, discovery day, I could see a thin line attached to each yolk to form a "comma."  This line grew into the fry.  By Wednesday I realized that all of the yolks had floated to the top of each egg cavity.  I noted that of the eggs still free of fungus, those that would continue to develop, had yolks of a metallic gold.  The other yolks were a flat yellow. By Thursday the curled, developing forms would flinch every ten to twenty seconds.  This image made me think of an eye winking.  These embryos were not attached to the walls of the egg shells.  On Friday evening I carefully lifted the granite rock out using a shallow container to keep from exposing the eggs to air.  As I counted the few good eggs left with my magnifying glass, I could swear I saw their hearts beating.

On Saturday morning I found two of the egg shells abandoned.  Some fry had hatched but they were never found.  With a mix of excitement and panic I retrieved all of the good eggs and put them into two Tupperware containers and aerated them.  The granite stone in one container and the other held the eggs from the breeders net and the eggs I had siphoned from the glass.  From the abundance of eggs with which I started, only a few developed fully.  By Saturday evening, 5-plus days after discovery, my containers held a total of 9 free swimming (darting) fry that new instinctively when and how to seek cover from my probing.

I left the fry in their containers for some time, five in one and four in the other.  For first foods I fed them green water mixed with APR (Artificial Plankton and Rotifer) from Wet Thumb Aquatics.  I also added a small portion of microwonms.  At about the end of a weeks’ time I supplemented this with a few baby brine shrimp.  By three weeks I still had 6 and they were eating mostly baby brine shrimp.  All of my tanks were already holding fish or fry so I continued to use the two one quart containers.  Looking back I should have broken down and bought another 10 gallon tank.  I noticed, a couple of times, a high amount of nitrites and I suspect this to be the culprit for my first three losses.

At six weeks a fluke accident occurred.  A darter fry let itself get sucked into the air tube I used to vacuum the bottom of the containers.  The problem was that it was too big to pass through it.  I eventually blew this fry out but its' side was ripped and it died within hours. A couple of weeks later I lost another, probably to nitrites.  At this point I combined the fry in a four gallon styrofoam cooler with a sponge filter.

Before disposing of my fatalities I measured the darters.  A six week old specimen was 22mm long including the caudal fin.  An eight week old darter measured 27mm (about an inch).  Eleven weeks post hatch my longest survivor stretched 33mm.  According to my research, the fry hatch at about 5mm.  At first I thought my daily feedings of baby brine shrimp was boosting their growth.  I then learned that a year old specimen averages 49mm over a potential range of 32-67mm.  Considering that their growth is probably confined to a few months, my results were average at best.  I did observe a slight variation of growth among the fry.

Due to my limited tank space, I never had a good opportunity to observe the fry's behavior from the side.  I can say this: For the first sixty days the fry would rest motionless on the bottom.  I had not given them any cover. Now that I have placed a filter and a rock in their habitat, they will seek cover as soon as they notice me.  The adults are willing to stay out in the open.

When my fry were auctioned for the Breeders Award Program, I elected to buy them back.  The price was too low and the fry were too special for me to let them go. I will continue my observations for the time being.  Perhaps soon they will be able to mix with the adults. Maybe I will enter one in next year's show.  One thing is certain, next spring I will return to collect more darters with hopes of doing it again.