Freshwater gobies make great aquarium fish. Their anatomy is designed for sitting in place rather than rushing about, so they are generally happy in small spaces. They tend to be peaceful, easy to feed, and come in a wide range of vivid colors.

Most goby species are difficult to breed in captivity, but many hobbyists have succeeded in breeding members of the genus Rhinogobius. I’ve kept six different species within this genus, and (with a great deal of help from members of the ‘Rhinogobius’ Facebook group) have had success with raising a few of them.

The Rhinogobius species available to hobbyists tend to be fairly small, with adults ranging from 5 to 10 cm. They are carnivorous and, like most carnivores, will eat whatever fits in their mouths, but are not otherwise aggressive towards other fish. Males can show aggression towards each other but their territories are generally tiny – so as long as a cave or sight break is provided for each male aggression within a group should be limited.

Many people keep small groups of these fish in standard 10-gallon tanks – I keep mine in groups of four or five in 24-inch-long 15 gallon tanks. My gobies are generally on their own but I’ve also kept them in tanks with mid- or surface-swimming tankmates (e.g. rainbowfish) without problem. They will not surface to eat floating foods – I feed mine live food, frozen bloodworms, and small sinking pellets. If keeping with tankmates it’s important to make sure some food makes it down to their level before the fish in the upper strata have snatched everything.

All Rhinogobius seem to appreciate a current, but many species are fine without special arrangements. Some of the rarer imports are from cooler climates, and these fish are quite sensitive to high temperatures and low oxygenation, so I try to keep an aerated powerhead running full blast when I keep these species. Most commonly-kept Rhinogobius seem to be from Taiwan or Vietnam; the one tank of gobies that I’ve definitely lost to heat was from mainland China where presumably the climate is a bit milder.

I keep all my gobies over sandy bottoms because the males like to dig. I’ve experimented with slate, rocks, and driftwood as décor but they seem to like ready-made caves the best. My caves are overturned flower-pot saucers with a notch for a doorway; other hobbyists use a jar lids with a flap cut out. Size doesn’t seem to be critical, as long as the male can get in and out, dig out the floor to his liking, and sit in a place where no one else can see him.

Rhinogobius cf formosanus - gravid femaleIn most cases sexing Rhinobogius is straightforward – the males are larger, have wider heads, and brighter colors. They’re also territorial, which the females are not. One unusual exception to the ‘brighter color’ rule is Rg. formosanus in which the female has a bright blue patch when gravid – even these are clearly female-shaped, being smaller and plumper. 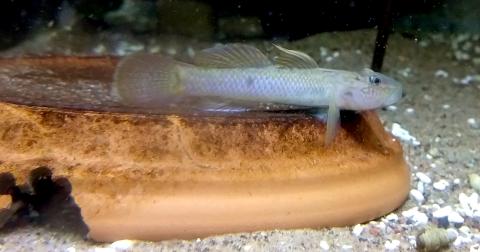 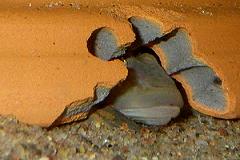 A healthy male goby will almost always be digging a cave, sparring with another male, or defending eggs. With a proper cave and well-fed fish, getting eggs shouldn’t be a problem. Once the eggs are laid, the male will often push sand up against the cave entrance; if I see a male sitting in a cave on Monday and I see the door blocked off on Tuesday, I know his cave is full of eggs.

Getting from egg to fry and beyond will require some knowledge about your particular species, but I’ve found two hard-and-fast rules: leave the eggs with the male as long as possible (but no longer!) and never, ever expose the eggs to air.

If you are an experienced cichlid breeder, that first rule will take some getting used to. Gobies parent more like marine species than freshwater ones: they guard the eggs fiercely, but as soon as the eggs hatch the fry look like dinner. The eggs need to be away from the adults before hatching, but when I remove them too soon I’m stuck in a losing battle against fungus. I’ve had the best luck if I first track how long a species incubates by counting days from when the cave door closes to when it opens again (generally a week or two) and then in a subsequent spawn try to pull out the eggs a couple of days before hatching.

When it comes to pulling the eggs, multiple other hobbyists have confirmed my experience: if the eggs are out of the water for even a moment, they will hatch prematurely. My process is to lower a shallow tray into the water, transfer the cave into the tray, and then gently move tray, eggs, and water into a hatching tank, where the eggs are gently aerated until they hatch. 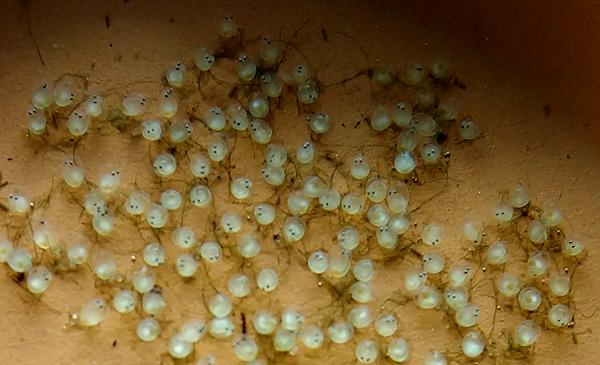 At least one other Rhinogobius-keeper has had good luck leaving the male in place in the cave and removing all other fish from the tank and then extracting fry as they emerge. I haven’t been brave enough to trust a parent with fry so far, but am likely to try this in the future.

Depending on species and conditions, Rhinogobius eggs will hatch into one of four forms: fully-formed, pelagic, planktonic, or wrigglers.

Rhinogobius robromaculatus pairHealthy eggs from large-egged species like Rg. rubromaculatus will hatch directly into tiny, fullyformed versions of the parents. They’ll eat brine shrimp or other small foods immediately and scoot around on the bottom just like their parents. The first time I witnessed this I was concerned because they acted like ‘belly-slider’ killi fry, but of course their parents were also belly-sliders so all was well. I’m told by other goby-keepers that most kinds of Rhinogobius fry take this simple route to adulthood, although I’ve only witnessed it with one species.

Rg. delicatus eggs hatch into pelagic, fresh-water fry. They’re ready to eat baby brine shrimp and other foods immediately, but are quite small and swim in the water column like little danios or newborn guppies. It’s only after several weeks of eating and growing that they ‘settle’ and start acting like gobies.


Rg. formosanus (and, presumably, other coastal-dwelling species) colonize new rivers via the ocean. They have teeny, tiny eggs which hatch into zillions of tiny sea-going planktonic larvae. These are even more passive than the pelagic delicatus larvae, mostly at the whims of the current. They also need to be transferred into brackish water (it works to transfer the eggs before hatching as well). They drift around living off their yolk sac for a few days, and then dine on microfoods (e.g. rotifers) for several weeks before getting big enough and strong enough to actively hunt baby brine shrimp. After several more weeks they settle and start acting like gobies, at which point they can be transferred gradually into fresh water.


Several people have successfully raised these fry to adulthood. The main challenge that has foiled habitual freshwater fishkeepers is that these fry are essentially marine fry, with all the attendant nutritional needs. HUFA supplements are critical and even after settling the fry require HUFA-enriched foods until they’re big enough to eat a variety of foods which naturally provide the nutrition they need.


Any time I see wrigglers (immobile fry with yolk sacs still attached) I know that something has gone wrong. Most likely I bumped the eggs, pulled them out of the tank too early, or took them out of the water briefly; in any case, these fry are almost certainly doomed. I’ve never had a wriggler develop into an adult; they just flop around for a few days and then expire.

Many imported Rhinogobius are bycatch or mixed, unlabeled imports, so species available to hobbyists are not well categorized. In many cases we resort to a catfish-like system of numbers (e.g. I’ve kept RG02 and RG03) and one of the most-commonly imported varieties is sometimes considered “The duospilus complex” rather than a single species.


The brightly-colored Rg. zhoui, Rg. rubromaculatus, and Rg. duospilus are occasionally imported in large numbers. I’ve seen them in local fish shops on occasion, and they can often be found on auction sites or at other online stores.

Outside of those three species, I’ve only ever encountered Rhinogobius on aquabid or via hobbyist connections. When shipping or buying gobies by mail, keep in mind their unusual current and oxygen requirements – they need a lot more space and a lot more water than a killi or livebearer.

With luck, in the future there will be more goby keepers in the world and hobbyists will be able to maintain a wide array of captive populations. In the meantime, I’ll be keeping an eye on Facebook and the bottoms of my local shop’s tanks for random, lucky, or accidental imports.