A World of Fish Story 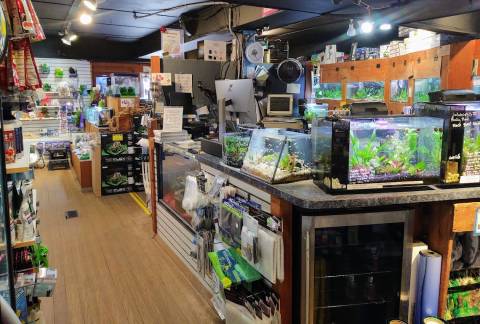 A World of Fish - a view of insideWalking through the front door of A World of Fish (WOF) was like stepping onto a tropical island.  One moment you’re in a tiny parking lot with the wind cutting through your parka, then you’re in a balmy, slightly humid space filled with brightly colored aquariums and aquarists talking fish.   It was a little cramped, but you would move from the community fish tanks in the front into different areas of the store, from the African cichlid tanks over to South American section, to the aquatic plants corner, to tanks with oddball fish, the room with marine tanks...

That’s exactly the environment that Ted Levin, owner of WOF, wanted to create.  “I visited many, many fish stores and took the best ideas, like a nautical theme with the cedar planks and nets in the front, the store layout with distinctive specialty areas, lots of stuff.”  Ted wanted visitors to feel like they’re on a treasure hunt to find something special - certainly special enough to take home.

A World of Fish has been one of the most successful independent pet stores in the Twin Cities.  The store on 66th Street in Richfield was always packed on weekday afternoons and weekends.  Even when it wasn’t busy, there were always families with young children gawking and pointing at the tanks.  But after 48 years in business, Ted LeVin announced that WOF was shutting down to allow the City of Richfield to redevelop the block.

While Minneapolis, St. Paul and the surround suburbs enjoyed more than its fair share of independent fish stores, every fish keeper, whether local or somewhere in the upper Midwest, knew A World of Fish.  Its closing on April 30 was covered by both WCCO (http://minnesota.cbslocal.com/video/6230068-richfields-world-of-fish-closing-shop-after-nearly-half-a-century/) and the local FOX channel (http://www.fox9.com/news/a-world-of-fish-owners-prepare-for-retirement). 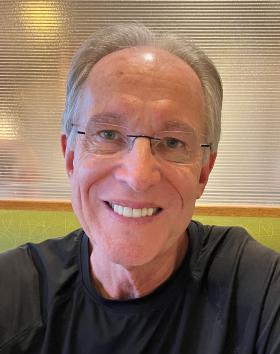 Ted LevinMoving into semi-retirement, Ted discussed some business approaches that drove the success of A World of Fish.  “So much depended on having great employees”, said Ted.  He rattled off a series of names of people who worked 20+ years for him.  “You have to pay your managers a wage that will make them want to stay, provide flexibility so they can juggle life and job responsibilities and empower them to make decisions.”  Because WOF managers could made their own decisions, the owner had free time to pursue other interests.  Over the past two decades, Ted also built a lodging hospitality business in Wisconsin.

From the beginning, Ted knew that having the best fish was critical to attracting customers and achieving profitability.  “It’s hard to catch fish in a tank with plants and decorations.  And afterwards, our employees had to replant and rescape the tank.  We also had a regular schedule to control algae buildup.  But plants make the fish pop with color, and beautiful fish is why people come.”

As the hobby evolved, Ted quickly adopted new trends while maintaining basic business principles.  “Galaxy rasboras will virtually glow in a planted nano tank, so I put these up by the cash register.  While you wait in line, you look at the nano tanks.  Those nanos turned over so fast that we added new tanks every week.”  With the rise of chain pet stores and the Internet, Ted was glad to focus on livestock.  “I was very happy to have Petco and PetSmart sell tank setups and dry goods.  Those things took up a lot of space, had lower margins and took more work to sell.  The chain stores appealed to beginners, and I wanted to sell to intermediate to advanced fish keepers.”

A World of Fish’s customers were already knowledgeable about keeping aquariums, but they usually wanted more information.  Ted recruited experienced fish keepers for temporary help.  “I’ve had doctors, lawyers, dentists, psychologists, young people and retirees who wanted to work at a great place for 1 – 2 shifts a week at A World of Fish.”  And get an employee discount for fish, no doubt.

A World of Fish was one of the first pet stores to set up a club membership system.  “We had a paid membership system and many club members worked at Petco and PetSmart.  Guess who they recommended when their customers wanted something more than beginner fish?”, he smiled. 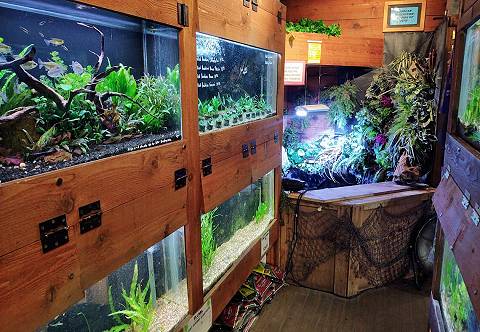 When aquascaping became popular, Ted set up a dedicated space in the store where customers can arrange their gravel, driftwood, rocks, etc.  “I saw a shop that had a dojo table, where their customers can lay out an entire scape.  Jill (his wife) and I refinished an old pump room in the back of the store and installed a dojo table.  You can adjust the table to whatever tank size you had, set up decorative items from our shelves and finalize your design.”

Remaining stock from A World of Fish will be auctioned (http://www.k-bid.com/auction/list) off beginning in the third week of May, through Sunday, June 5.  According to Ted, items still available included many 125-gal, 40-gal, and 55-gal display tanks, the frag system, Japanese koi fish, etc.