The last FAAS report released an aggregate list of all registered spawns through Sept. 1, 1990.  These recorded spawns are sent from aquarium society BAP chairpersons from all over the country.  Club members out there have happy little fish doing their thing in happy little tanks.

According to the report, Poecilia reticulata came in with the largest number of spawns at 832.  Here's my little fish, Pseudocrenilabrus philander disperses at 17.  I'm thinking, either I have a rare fish or perhaps my tank had the right conditions required for a successful spawning.  Now these things may or may not be true but I'm excited.  Although I’ve had a tank up and down for nearly as many years as gallons, I have never had the desire to spawn fish.

Apparently neither has any of the fish I have owned.

So this is my first spawn and I'm proud, I'm digging it.  I'm also compelled to analyze why these fish, under what condition, etc. have spawned for me.  I've always ignored the spawning procedure sections in books, but now I can understand why they are there and the pre-occupation people have with these paragraphs.  There's nothing like the Intensity of color a male cichlid has during spawning, despite his not so cheery disposition.

When I purchased these fish during a regular meeting BAP auction, they were what I would consider fry.  Keep In mind that I had never seen newly free swimming fry.  All I heard was that they were a dwarf cichlid with bright blue lips. Sounded cool, I liked the colors.

Later I contacted the breeder and found out they preferred soft, acidic water, moderate temperatures, and if I wanted to read up on them to check Into the Dwarf Egyptian mouth-brooder, as they were similar.  I was also told that they were considered a "friendly" cichlid.  This was an important characteristic for me since it was only my third experience with cichlids and I didn't want any nasty fish in the house.

Since my 20 gallon tank had the right conditions, I plunked my bag of fish in.  Before I released them though, I set up a net trap for them.  Once I released them my angelfish and Geophagus could only stare and drool at them in the net.

I raised them on crushed and then whole Tetra™ bits. As they grew, they were constantly straining to see me through the netting, a peculiar habit they still have.

I feel that they were slow growers, especially compared to those hungry little angels.  But finally after about a month and a half, I released them into the spacious tank.  It suddenly looked real crowded. None of them had died so I decided to set up my 10 gallon tank just for them.

My first spawn happened one evening 2½ months later.  I've only had the fish 4 months and was wondering, "What kind of mother am I?  Babies having babies?"  I also wondered if this female had missed the Geophagus so much that she had adopted their habits by the way she was moving her mouth, "glub glub glub"!  I made some phone calls and found out sure enough, they had spawned. I then set about recording information.  Temp. 74 F., pH-7.0, ammonia-0, nitrites below 0.1.  Probably the most important factor was that they weren't in a community situation. 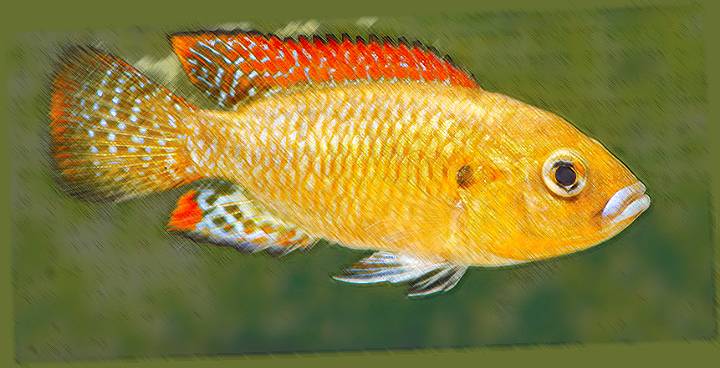 The male was splendid.  His dorsal fin was lavender edged in black.  His body was pretty much the same as always – golden yellow, but his lips were practically glowing blue.  He would strut and twitch his orange egg spot towards any nearby female, except for the one that was holding the eggs.  The dominate male aggression was reserved for the second most dominate male.  In fact, this aggression became so bad (for me) that I moved the dominate male back to the other tank.  I then separated the (holding) female off from the others with a tank divider and placed a piece of slate held up by a couple of marbles.

I was told she would not take food while she was holding so I didn't feed her.  I was also told to expect that there would be tiny yolk sacked fry in about 5-7 days and that they would hide under the slate.  Well I started hatching brine shrimp and when 7 days had passed I saw nothing.  Twelve days and still nothing.  On the 16th day two fry came out of the females' mouth and both died as far as I know.  I lost track of them in the gravel.  The next day I started feeding the female and she accepted the food greedily.  She looked peak-ed but was lively.

I wondered what happened?  I thought cichlids were supposed to be such terrific parents.  I thought the fry would use their mothers' mouth for protection and not be considered potential food by the parents.

Saddened, I moved male #1 (the dominate one) back into the 10 gallon tank and removed the divider.  Male #2 had by now taken over that tank and now was even more aggressive than male #1 had been to him.  Perhaps it was pH shock, but within 2 weeks male #1 had died and male #2 had spawned with a different female – female #2.  brine shrimp again going strong, I waited patiently and on the 13th day I noticed another females was holding.

Well this is getting down right confusing and I suppose it's worse for you reading it, but, since female #2 was separated from the others as #1 was before, I added female #3 into her quarters only to see all hell break loose between them.  Within an hour I had improvised a divider for their already divided space.

On the 19th day after spawning for female #2, I saw 2 fry and then another on the 23rd day.  It was then that I decided to get her out of there as soon as possible.  I put the fry in a trap and wondered how the female could still be alive after 23 days without food?

The following was the 12th day of holding eggs for female #3.  An informed individual at our board meeting said 12 days was long enough, that the little fry were ready to come out and no mater how right the conditions of the tank might be it would never be like nature in the tank.  Wise wisdom, but I still had no knowledge of what to do next.  I was told of a technique of holding the fish upside down over a plastic bowl with water in it prying open the females' mouth with your little finger nail and dipping her in and out of the water until all the fry came out.   You would then raise the fry separate from the mother.  But I wasn't going to do this to a fish only an inch and a half long!  I couldn't imagine holding it letting alone getting the fry out.

What's great about this club is that there's always someone there who will come to the rescue with just the right answer.  If when I got home, got my hands on a turkey baster,  insert mom in head first and then squeezed the bulb with the tip under water a few times that I would see all kinds of baby fish.  Well I've never seen anything work so slick in my whole life!  Super easy and quick, but again mistakes.  I had the net trap in with the adults when I did this and the heavy yolk sack babies fell to the bottom of the trap where the adults tried to gobble them up right through the netting.  I ended up loosing ten of the fry from this.

I hurriedly shooed the adults away and repositioned the net trap to one side of the tank.  I then put in the tank divider between the net and the adults.

After all the dust had cleared and several days of absorbing their yolk sacks had passed, I had over 20 free swimming fry from female #3.  Add to that the 3 larger fry from female #2... I just realized how female #2 had survived for 23 days without eating. That little cannibal!

So I'm happy and proud.  I'm digging it but now I'm asking myself this question: "Just what does one do with all these babies!?!"