Andrew repeats for a second straight year as Breeder of the Year within our BAP program.  He accomplished this spawning 17 species for 250 points.  Andrew does not shy away from different and tougher-to-spawn species – he spawned the 25-point marine Clownfish, propagated corals, spanned several families, and held a nearly 15-point average for each submission in 2021. 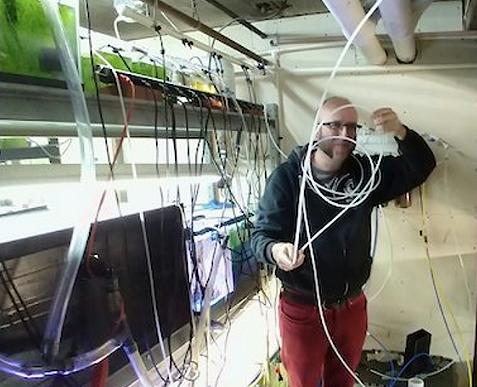 In 2021, tell us a little about your fishroom and/or breeding set-ups. how many tanks, roughly the sizes of tanks you work with.

I have about 25 tanks total. Most are on the smaller end (3, 5, 10 or 15 gallons). I also have a rack of 30-gallon breeder tanks which are great for growing out gobies and other small fish or bottom-dwellers.

I also have a reef tank, and have been using plastic tubs as grow-out space for marine fish.

I have a lot of light in the fishroom and most of my tanks are full of plants, algae and detritus. If I need a sterile tank for spawning I usually set up a temporary tank and then move the fry into a planted tank to grow up.

What fish groups currently interest you in breeding efforts?

I'm keeping a lot of Rhinogobius gobies right now, and hoping to acquire another species or two soon. I'm trying to raise multiple spawns from a few of these species because there are a lot of people interested in keeping gobies but not a lot of gobies available in shops or online.

I'm also experimenting with a couple of marine fish species, but since I only have the one tank there isn't room for a whole lot of broodstock. With marine tanks there's a whole new variety of invertebrates that I'd like to learn more about.

I've also been acquiring a few catfish species lately but haven't had much luck with spawns so far.

Tell us a little about the effort did you put into breeding this past year? (a response could cover how you acquired species, the tank set ups, trial-and-error attempts, foods and conditioning, efforts at isolating and raising the fry, research/study of the species, etc.)

The big accomplishments of my last year was successfully raising some ocellaris clownfish fry, and a few marine neon gobies. With reef fish, getting eggs and fry turns out to be quite easy, but keeping the fry alive for more than a few days took many attempts.

With the clownfish the main challenge was keeping a stable rotifer culture so I would actually have rotifers ready when the clownfish eggs hatched; I killed half a dozen rotifer cultures and at one point I gave up on rotifers and tried raising clownfish on baby brine shrimp but that only got me 3 surviving fry. 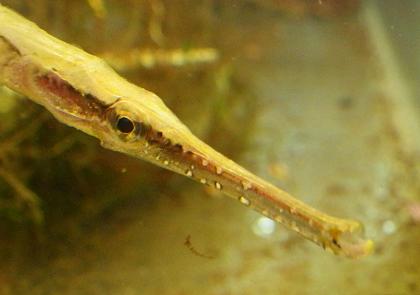 At the same time that I was working with the clownfish I was also trying to raise red line pipefish (Microphis brachyurus). They're a brackish species -- the adults are quite tolerant of a range of water types (including pure fresh water) but the fry seem very sensitive to salinity. I set up a row of tanks with varying salinity for the pipefish fry and started rotifer cultures in those tanks. I still haven't gotten the pipefish fry to live more than a few weeks, but I discovered that the rotifers did really well in one of the brackish tanks (around 20ppt salinity) so I wound up skimming rotifers out of the pipefish fry tank and feeding them to the clownfish and that was what finally got me more than a few surviving clownfish fry.

So, I wound up with two rotifer lessons: there's a sweet spot where the salinity is low enough to make life easy for rotifers but high enough that dumping the rotifers into the saltier water with the clown fry doesn't kill them. And also, feeding the rotifers live algae works a lot better for me than using the concentrated paste that most online articles suggest.

Feeding the neon gobies was easy once I had a steady rotifer source, but I still lost a bunch of spawns. The fry kept getting stuck in the surface tension -- finally I replaced their aeration with a bare tube rather than an airstone and that worked a lot better. The neon gobies spend a lot longer as plankton (almost a month, as opposed to a week for clownfish) so keeping decent water quality while not having the fry get sucked up into a filter or a protein skimmer is a real challenge that I haven't totally solved yet.

Tell us about any new species or breeding projects for your 2022 year. 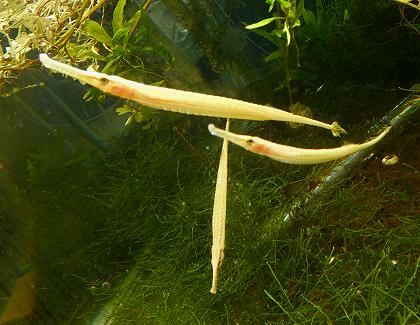 I gave my occelaris clownfish pair to Mike Fries, and now I have a pair of tomato clownfish (Amphiprion frenatus) which may or may not be old enough to spawn in the next year. I'm also hoping to get a pair of fire shrimp (Lysmata debelius) because I've wanted to try raising them for years.

I have three new species of corydoras which are almost big enough to spawn. I've raised cories before but it's always been by luck or accident so I'd like to learn more about getting them to spawn when I'm actually expecting it.

And I'm going to keep plugging away with the microphis pipefish. The fry look so rugged but turn out to be so fragile!